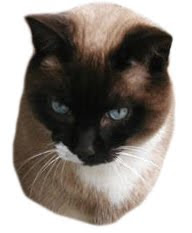 Spike the Cat was a Birman/Russian Blue kitten born under my bed in April, 1991, to Ms. Sally Forth, aka Thing; a Russian Blue found near Monroe Park a few months earlier. She'd arrived mid-winter, and apparently chose to stay after sampling the local mouse population, and the handsome Birman on the next block.

Spike had a long and illustrious career as a decorative and warming sofa-cushion, with extraordinary purring levels.  He was a large, plush, snuggley guy who purred like a boat motor, and had only one thing to say: "Mur." His purr was so loud that a guest once woke me during the night to report that there was a "strange buzzing noise" coming from the corner of her room. It was Spike, settling in for the night.
He also dabbled in quite a bit of catnip, which probably influenced his lifelong dedication to  Deconstructionist Sculpture.

In 2003, he was diagnosed with kidney failure, and the vet did not expect him to live 2 months, but then casually mentioned that a change in diet might help. I researched feline nutrition, and started trying different diets on him. He improved immediately on raw meat, but had a tendency to drag the larger meaty morsels out of the bowl to savor privately. I began grinding his food after discovering a forgotten chicken wing under the sofa.

Experimentation, driven by the desire to keep Spike healthy, led down a path of feline and canine nutritional study, and resulted in a consistent recipe that worked not only for Spike, but also for my other cats and dogs too. I've always referred to this recipe as chicken salad, and it is now known officially as Spike's Chicken Salad.*

Spike thoroughly enjoyed his chicken salad, and recovered his health quite comfortably. He received no other treatment or medical intervention; the only change was to his diet. His coat was plush and full, his beautiful blue eyes bright and clear, and he stayed active and healthy until his kidneys completely stopped functioning in 2005, a year and a half after his predicted death. Losing a loved companion is never easy, but because of Spike, I now open doors for four more happy chicken salad enthusiasts, aged 12, 4, and 2 years old.


* Cats are obligate carnivores, meaning their protein must come from meat. They also require the amino acid Taurine every day. Additionally, their digestion functions most effectively when their food contains at least 75% moisture. Spike's Chicken Salad recipe is primarily fresh chicken, with plenty of organ meat to provide that Taurine they need. It's ground up with other healthy ingredients and just enough water to make it easy to store, serve, and eat. Grinding also ensures that all the nutrition is bio-available, and that cats eat their meals in the bowl, not under your sofa!
cats Chicken nutrition raw Spike

How to Fit a Gentle Leader

If you've walked your dog to the DogTown Lounge booth using a Gentle Leader, chances are you've seen me check quickly to ensure that it is fitted properly, and that your dog is comfortable. I may have spoken to you about the fit, or asked if I can adjust it for you. The Gentle Leader can help keep a dog from pulling, but if it's not adjusted just right, it can make your dog fight even harder, as he tries to get it off his face.  Since there seems to be a lot of confusion over the included directions, and folks have told me that they were instructed incorrectly by pet supply store employees, I've put together a flyer with these simple instructions. Stop by the booth at the South of the James market and pick one up. 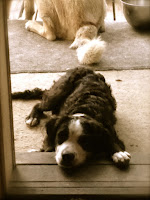 As many of you know, here at the Lounge, we've often fostered dogs on their way to a new life. Typically, these dogs are very large, Livestock Guardian Dog types, Anatolians and their mixes. Recently, I took on a puppy that was alleged to be part Great Pyrenees, which she's clearly not. Here's the 7 month old puppy Fletcher & I are fostering; Ms Gidget "The Bean" Wigglebutt. We had been looking for a good companion for Fletcher, whose 10.5 years are beginning to show, and he's slowing down. Gidget is not the one he was looking for, and he's definitely still looking, so Gidget will need to find just the right family to call home. 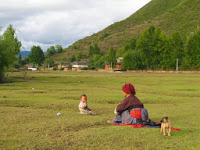 Thinking this morning about the multi-faceted culture of the Mosuo people, an agrarian tribe living on Lugu Lake  in China. There are many reasons to study these unique people of the "Women's Kingdom,"  with their special method of preserving pork, traditionally sustainable growing practices,  brightly colored fabrics, and strongly matriarchal socio-political system. My mind keeps returning to a lovely Mosuo myth involving dogs.   It is traditional for each Mosuo child to be formally celebrated into their 13th year on January 1st, in a feast with specific rituals symbolic of new adult rights and responsibilities. Standing at the support pole for the mother's house, one foot on pork, the other on rice, each child dons the full skirt, or long trousers, of their first set of adult clothing. They complete their step into adulthood by offering food to the household dogs; the first of a lifetime of such formally offered meals. Here is the story behind that ritual.