Since 2003, I've been making natural raw food and treats for my pets, using only fresh raw meat and healthy locally-grown ingredients.
My goal is to help you keep your best friend healthy and happy too. 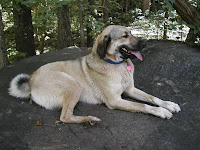 When Annie Fannie bo Bannie arrived in 2003, she was skinny, starving, scarred, and wouldn’t eat anything but raw chicken wings. This went against everything I believed about feeding dogs, so I started reading all I could find about raw diets to learn how to feed her properly. Convinced that it was the right path by the clear evidence of a much happier, healthier Annie, I started grinding up liver with eggs and fruits to increase the variety in her diet. My sweet Annie left us in January 2012, after a struggle with neurological issues arising from abuse she suffered as a puppy.

Spike the Cat was diagnosed with kidney disease in 2003, and I was told there was no effective treatment, but that he would probably live another month or two. He was 13 years old, lean and frail, his fur falling out and eyes full of pain. Switching him to a raw diet seemed to give him another chance at life, and motivated me to learn more about nutrition and pet food. 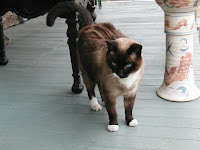 Here he is in mid-winter 2004 with his beautiful coat full of static, about a year later. He'd had no medical treatment, only a change of diet to Spike’s Chicken Salad. On this easily digestible and highly nutritious food, Spike’s thick, plush fur grew back in full, his eyes were bright and sparkly, and he lived another 1.5 years. 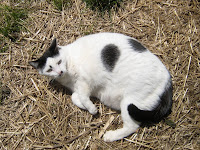 Mais Ouí, who made a dramatic entrance in 1998, was an eager convert to Spike's Chicken Salad in 2003, and continued to enjoy her meals - perhaps a bit too much - until her demise in October 2010. She loved to eat grasshoppers and crickets too, and her avid bug-hunting hobby helped keep her busy and plump. Mais Ouí really didn't care to be around anyone or anything else, and stayed quietly by herself most of the time. She liked bugs and catnip when it was not quite dry.

On his first day home here at the DogTown Lounge, in early 2006, Fletcher Lou had raw chicken for dinner. He was 9 weeks old then, and has never been shy around food. He and Annie enjoyed Spike’s Chicken Salad about once a week, when they caught up on trace minerals, vitamins, amino acids and other necessary nutrition they might have missed otherwise. Other days they ate big chunks of meat and bone, usually chicken, but also pork, venison, or fish.

The Lounge dogs also enjoy a few meals of Charley Chow every week, by itself or with added meat and veggies, at a rate of about 2% of their body weight per day. In the heat of the summer months, dogs usually drop to 1.5% and occasionally fast for a day, but drink more than twice as much water.  Most of her adult life, Annie was about 80 lbs, and ate 1-2 lbs per day, fasting every 14 days or so. Fletcher weighs around 135 lbs, eats around 2 lbs per day, and only fasts when it is very hot.

Poof was a stray when she arrived in December 2006 as Fletcher Lou’s first birthday present, and she eagerly switched from dry kibble to Spike’s Chicken Salad within 4 days. She is a svelt 9lbs of lean muscle, and typically eats 4 oz a day. We thought she was spayed, but in March 2008, she surprised us with 3 kittens. 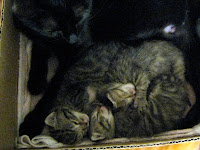 The kittens were introduced to Spike’s Chicken Salad at 4 weeks. As their demand for food soared between 6-12 months, they also free-fed Kirkland Chicken & Vegetable kibble, but Spike’s Chicken Salad has been their primary diet outside of those few months. They’ve grown into big, healthy cats, with beautiful soft coats and shiny white teeth, and each one is quite different with a unique personality. 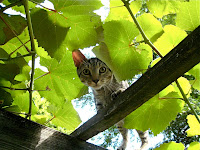 Josef is extremely active and adventurous, always climbing to new heights, and rarely relaxed, so he needs a lot of protein, and usually eats at least 6 oz a day.  That works out to over 3% of his 11lbs of tightly wound energy. 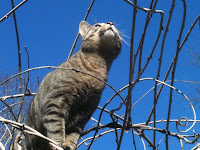 Update 7/13: At 5 years old, Josef has settled into a solid 16lbs of muscle, and his activity level has remained high. His prey drive is also very high, and although he sometimes prefers whole raw chicken drumsticks or thighs for dinner, the volume of food he eats is still around 6 oz/day. 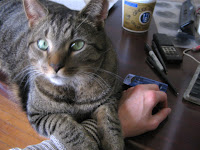 His brother Chauncey is very laid back, prefers to snuggle on a lap or doze in sunlight, and he usually eats a little less than 4 oz per day, or about 1.5% of his plush 16lbs. 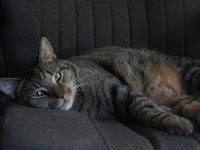 Update 7/13: At 5, Chauncey remains sedentary, but is very playful and can be seen racing around like a kitten occasionally, especially when it's raining. He's still not a heavy eater, but his large frame is now well clad in dense muscle at around 20lbs.

In November 2012, a foster dog arrived; Vela (Vay-lah) is an Anatolian/Great Pyrenees cross from Texas, sent here by the National Anatolian Shepherd Rescue Network.  She's about 2 years old, has been bounced around a lot and will need plenty of patience, time, and opportunity to learn how to be a helpful member of the Tasting Team, but she's a sweet girl with a lot of potential. 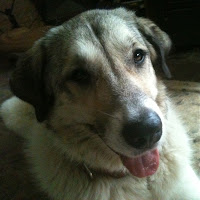 Vela may have been left to fend for herself as a stray at a young age, so food had been a point of contention for her. Now that she's beginning to understand that there will always be enough food, and pets, and belly rubs, she's able to relax and settle in more. She's gained much needed muscle tone, found a new friendship with Poof, likes to play very rough with Fletcher, and is enjoying having a regular routine. Her protein needs are quite high, and although she is about 85 lbs, she's eating 2-3 lbs/day while her body recovers. Isn't she lovely? 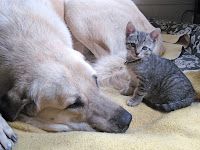 I've found a close relationship between the nutritional needs of cats and dogs, although cats have strict daily requirements, and dogs are far more flexible. I came to the conclusion that dogs can eat what cats eat, but they need less organ meat, more fat, and less protein than cats do. Dogs can also digest plant proteins, which cats cannot.

DogTown Lounge pet food recipes are readily digestible, efficient meals with plenty of bio-available nutrition, so pets don’t need to eat very much to stay sleek and healthy. Please use the Feeding Calculator above as a basic guideline for how much volume to feed your pet.

"She didn't hesitate at the bowl, jumped right in and ate."
- owned by a dog
"It wasn't pretty, but cat food isn't
supposed to be pretty. My cat loves it!" - owned by a cat
"Ate every morsel and checked each other's bowls to look for leftover molecules." - owned by 3 dogs
"4 paws up!" - owned by a cat